Home THINGS TO DO JUMP OFF OF A 108 STORY BUILDING. 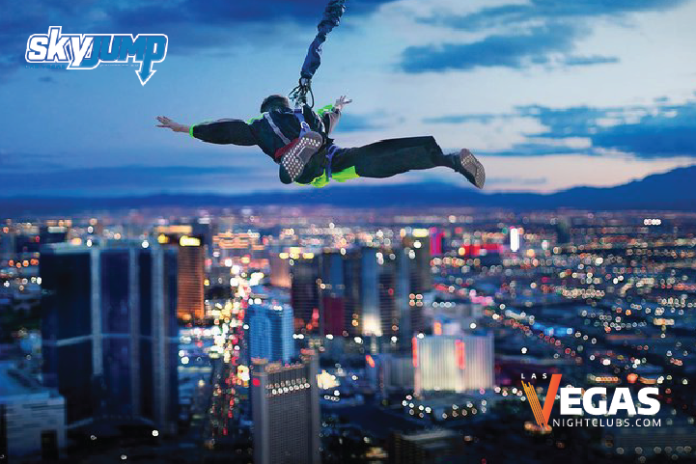 We don’t often encourage readers to jump off of tall buildings, but will make an exception for Stratosphere’s ultimate thrill ride, SkyJump, which has you plunging down an impressive 108 stories in approximately 17 seconds. To put things into perspective, the Stratosphere’s observation tower is the tallest in North America and you are (safely) jumping off of it. In short, it’s pretty damn awesome!

Many people make the mistake of thinking that SkyJump is a bungee cord. It isn’t. Think of it more as a very, very controlled descent down the side of the Stratosphere Tower. You are harnessed in and attached to a cable that is connected to a descender machine. Guide wires keep you on course and on target. Just before reaching the rapidly approaching ground, you are slowed down for a controlled and safe landing. Simple, right?

A word of advice. Don’t freak yourself out, the jump itself is a total piece of cake! We found that the (perfectly normal) nervous feeling you get before you jump off of the platform to be a lot like the one you get just before you skydive – all in your head and quite unnecessary! This facility has had a perfect safety record throughout the now tens of thousands of jumps that have taken place since they opened in 2010, and their sister SkyJump in New Zealand has operated for more than 10 years without a single injury! If you need a little extra encouragement, just think of the many times you’ve probably gotten on an extreme roller coaster and not given a second thought to whether or not it was safe. It’s basically the same thing. Suit up, take the plunge and tell your friends all about it!

HOW MUCH IS SKYJUMP?

SkyJump is open Sunday – Thursday, 10am–1am and Friday to Saturday from 10am–2am. The attraction is closed during any rain, lightning or when winds exceed 44 mph.

Reservations are not necessary, but it might be a good idea just to make sure there isn’t a big line for the jump when you get there. Make one by calling contacting us at [email protected].

VIDEO OF SKYJUMPER OVERCOMING HIS FEAR: