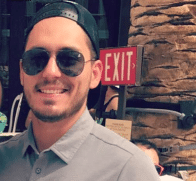 If not originally from Las Vegas, where did you move here from?

Born and raised in Las Vegas.

How did you start working in the nightlife or hospitality industry? Give a brief work history / background.

While studying Clinical Nutrition and pre-professional Biology at UNLV I also worked as a guest service representative at The Mirage for a year. A year later I moved to VIP Services at Caesars palace, then to Mandalay Bay / Delano VIP Services. Originally applied to be a busser but after review of my resume they offered a VIP Host position.

Now that you are working in the industry, what is different about your lifestyle?

My lifestyle hasn’t changed much other than being around the clock, working doubles, and having to have my phone on me constantly. I am still very much into doing the things I’ve enjoyed for many years prior to this position.

What does a typical day at work look like for you and what is your “normal” schedule?

How long does it take you to get ready for work?

How many nights a week do you go out (to a club)?

Who is your favorite DJ/performer in the Las Vegas market right now?

What is your drink (alcoholic) of choice?

What is your secret cure to a hangover?

I have yet to find one. Probably an IV.

What was the longest timeframe you have stayed awake? When and why?

A little over 24 hours on March 2nd we had an EBC/XS outing at Hak. We went to Austins after and before you know it we had to change to go open beach club for the season.

What do you enjoy most about working in the nightlife or hospitality industry in Las Vegas?

I think the best thing about it is the amount of people you meet in an around the clock job like this. Also we get a lot of free stuff which is cool.

What is your least favorite part about working in the nightlife or hospitality industry in Las Vegas?

My least favorite part is saying no to all of my friends wanting to come out (line skip + drink tickets) to EBC on Saturdays.

If you were not working in nightlife or hospitality, what would you be doing?

Originally I wanted to go to medical school so I would probably dabble in some medical field to really figure out what I want to do.

Do you have a mentor in the industry? If so, who? If not, who would you like to be mentored by?

When I was new David Schnitzer helped me out a lot with things that I would never be able to do as a
“new guy”, and also instructed to “fight for your tables” which is something that stuck with me.

Craziest or most memorable experience working in the nightlife or hospitality industry in Las Vegas?

It’s hard to pick just one because I have a ton of memorable experiences, both at work with some of the best friends I have met, as well as outings. I personally love Drai’s nightclub and my girl and her mac coworkers come out and know how to turn our standard outings into something we will regret at 10am the next morning working beach club.